What you need to know

The fitting of oxygen firebreaks is now a legal requirement for home oxygen installations across Europe.

Complying with the Medical Device Directive (93/42/EEC) or the more recently enacted Medical Device Regulation (2017/745) is a legal requirement for all economic operators in Europe, including home oxygen service providers.

The instructions for use for an oxygen concentrator placed on the EU single market will include an instruction to the effect that a firebreak ‘shall’ be fitted close to the patient to stop the flow of oxygen in the event of a fire.

The applied CE mark is reliant on the home oxygen service provider following this instruction and fitting a firebreak.  If the firebreak is not fitted, then the Essential Requirements for performance and safety are not met and the CE mark is no longer valid.  It also means that the status of the home oxygen service provider, within the framework under which the single market for medical devices operates, changes from distributor to manufacturer with significant regulatory implications.

Additionally, the Medical Device Directive requires that economic operators adopt solutions that ‘reduce risk as far as possible’ in line with the
‘state of the art’, so the fitting of firebreaks is a requirement irrespective of the oxygen source, be it concentrator, liquid oxygen Dewar or gas cylinder.

Home oxygen fire deaths are being under-reported in France, Italy and other EU countries by at least four times. Available statistics from the European Industrial Gases Association (EIGA) suggest home oxygen fires caused 15 fatalities between 2013 and 2017 across 16 countries in the EU. Yet media analysis in another five-year period revealed 23 deaths in France and Italy alone.

The new data suggest that home oxygen fires pose a greater risk to patients in Europe than previously thought, with important decisions regarding fire safety and home oxygen devices being based on inaccurate reporting and incomplete data.

The report poses a series of urgent questions for the Competent Authorities in Europe regarding the reporting of home oxygen fires and the implementation of existing patient safety regulations.

President of the Healthcare Academy, Professor Brendan Cooper: “Seven years ago my article raising awareness of the danger to users posed by home oxygen was published with the hope it would guarantee the future protection of all patients. In light of this, I am surprised to find the close surveillance of home oxygen domestic fires and subsequent safety measures have not been widely implemented across Europe.”

The full report ‘The increased risk to patients from the under-reported problem of home oxygen fires in Europe’ can be downloaded here: 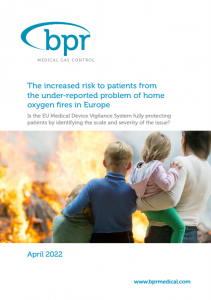 An infographic summarising the results can be found here: 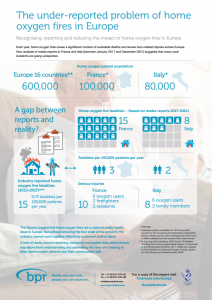 A White Paper providing a detailed analysis of the status of home oxygen service providers under EU regulation and the legal requirement to fit oxygen firebreaks can be downloaded here.